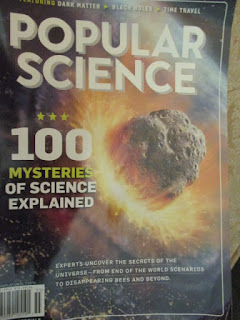 Some time back, I picked up the Popular Science “100 Mysteries of Science Explained,” edited by Cliff Ransom, on impulse in a checkout line at a Harris Teeter.

A few of them really deserve mention.

On p. 21, we have “What’s at the bottom of a black hole?”  The end of the piece mentions the latest thinking by Hawking, that a black hole might not exist at all, because quantum mechanics could prevent the final collapse within an event horizon.  That’s rather radical, as some time back Hawking predicted that even black holes emit radiation and could “evaporate”, rather like ice in sunshine.  There has also been controversy over whether information can be lost inside a black hole, or whether it is kept on the surface (like the track of a human soul).

One possibility is the existence of micro black holes , which could evaporate quickly, but which might temporarily achieve enough density because of the unused dimensions of string theory. Maybe souls ride these to the afterlife.

The book has some related articles on gamma rays bursts, and whether they could ever constitute a danger to Earth. It even indicates that space has an “odor”, metallic, from star stuff (p. 22).

On p. 63, there is “What is consciousness?”  We don’t know, but it seems fundamental to physics.  Living beings who reproduce and who can attain free will might be nature’s way to oppose entropy. Consciousness that we associate with intelligence seems to come into being because of quantum effects within structures in the brain, and it leaves open the question whether something like a quantum computer (at the NSA) could achieve artificial intelligence. But consciousness may be indestructible, as some accounts of NDE’s suggest.  Maybe our “consciousness” goes somewhere.  Maybe it is reborn in a being on another universe.  It’s impossible to imagine not existing once you have existed, but you didn’t exist previously, while billions of years passed. 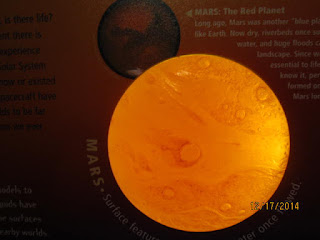 On p. 70, there is “What happens when you die?”  There is the idea that space and time are products of consciousness, and that when we die our consciousness has become separate from our bodies. There is some evidence that the brain can remain conscious, in a “core” state, for several hours after the heart stops, which raises the importance of the presence of loved ones at the end of life, and also questions about violent ends (brain destruction by bullets) or even the death penalty.   (As I recall, in Christianity, the afterlife in Heaven can start almost immediately, but in Islam, Paradise happens at the end of time.

The consciousness continuum matters to "Is the Doomsday Argument for Real?"  (p. 107). If humans went extinct around 2100, I would have placed about one-third the way along all possible people, a statistical argument (which I am not sure is correct).  It also bears on the question as to whether there is a moral responsibility to future generations -- to people who don't yet exist, have not even been conceived.  It could be viewed religiously as a duty to "God" or "Allah".
On p. 74, there is "Can you upload your brain to a computer?"  Omni Magazine speculated on that in the 1990s. On p. 75, "What is intelligence?"  It is more than recognizing yourself in a mirror.  From having been adopted by a stray cat once, I know that cats are sentient and can even reason.
Across the page, on 62, is “Why aren’t (most) humans furry?”  The answer seems to be, when humans developed bipedalism to use energy more efficiently, they hunted during the day in equatorial climates, and didn’t need hair (they did need pigment). But it’s not completely true.  Do our dogs and cats wonder why we are relatively hairless?  Maybe.  But males (especially Caucasian, with ancestors who lived in colder climates) often have some (moderate, when compared to other primates) chest, aim, and leg hair.  Curiously, like scalp hair, leg hair tends to disappear with age, maybe because circulation weakens. In some cultures, body hair may be help identify individuals and may relate to sexual attractiveness or unattractiveness.  Some animals have the same concept: bright plumage in some male birds, manes in male lions.

On p. 58, there is "Do men and women have different brains?"  Women have more white matter (connective stuff) and men have more gray (chess thinking).  But is the white matter ratio 6.5:1 or is it really 6.5% more (not 6.5 times) -- a typo?
On p.84, there is “What do whales sing about?”  They seem to make real (modern, atonal) music, and maybe it is really akin to language, especially with the orca.

On p. 80, there is “How big would a meteorite have to be to wipe out all human life?”  Not too big. The object that killed the dinosaurs was about seven miles wide, and would kill billions today. A 60-mile wide asteroid would incinerate everyone. 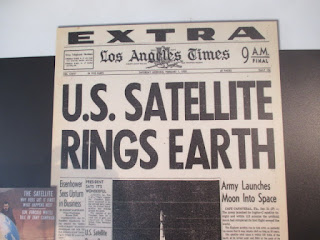 One other thing.  I have a lot of Twitter followers now in the book self-publishing business.  Some of them are a bit aggressive.  I see my role as developing and building on content, just on pushing commodities (although this doesn’t help other people earn livings as middlepersons). One person invited followers to “apply” to become a character in his next novel!

And, still, another matter:  a postman somewhere started a charity for a boy who just wanted books to read to be sent to him. So maybe books should still be a commodity.