"Are We Alone?" NatGeo asks and tells in a new glossy booklet 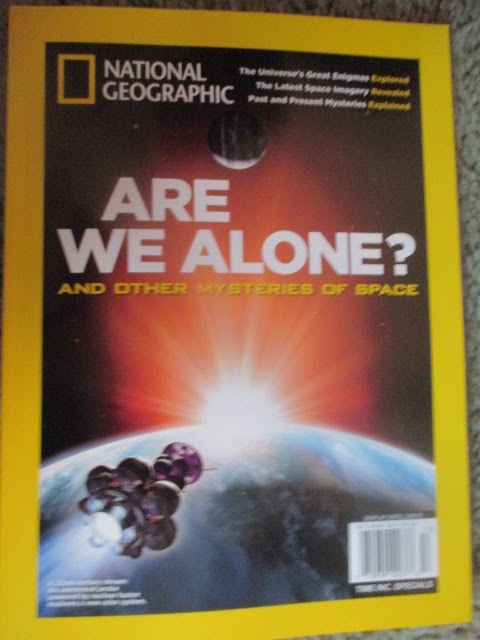 I’ve reviewed a few books on cosmology here, but I wanted to note the National Geographic magazine-sized book “Are We Alone? And Other Mysteries of Space”, edited by Bridget A. English, available in a lot of supermarket checkout lines.

The book has an Introduction and five major sections.

The most immediately interesting part is its evaluation of the likelihood of our finding life on alien worlds (the first section is “Strange New Worlds”).

The book maintains, surprisingly, that life could exist in the high atmosphere of Venus (still) and atmospheres of Jupiter and Saturn. In general, it sees the finding of methane on Mars as an indication of a pretty good likelihood of some sort of bacteria-like subterranean life.  It gives some hope to the idea of finding something in subsurface oceans on Europa, Ganymede, Callisto, and Enceladus, maybe Titan, but dismisses the idea of life on the surface of Titan, the only moon in our Solar System with a thick atmosphere, quite interesting as it is (with proto-organic compounds) but too cold.

It explains the Drake Equation to estimate the number of planets with life in our Galaxy, but the range of expected numbers of lifelines runs from less than 1 (us) to over 70,000.  An argument favoring life however, is that it arises under extreme circumstances on Earth and that intelligent species (like primates and cetaceans) can evolve separately and converge to have similar cognitive skills.

The booklet also tries to define life.  Is a virus alive?  What about a fire, since it can grow and consume?  Could processes that form and destroy stars involve their own form of consciousness?
The rest of the book gets into matters like dark matter or energy, black holes, the nature of gravity, sub-atomic particles and their relation to forces in physics, quantum mechanics, and space-time. The booklet accepts a relatively conventional theory behind black holes (which some physicists now say may not exist at all, but then what?)  You could wander into a sufficiently large and massive black hole and not notice that anything had happened until it was “too late”.