NatGeo: "Strange But True: Secrets of the Supernatural Revealed": Best article is one about near-death experiences 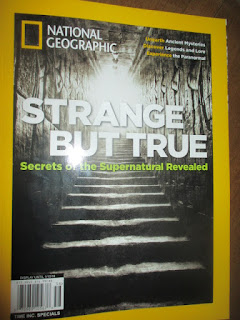 The three sections are “Animals, Myths and Monsters”; “Sci-Fi, Folklore and Ghost Stories”; and “Ancient Legends and Sacred Places”.

I’ll mention a few articles of most interest to me. The tone of the articles that most "strange" phenomena do have natural explanations within known science if we look hard enough.

One is “Are we on the brink of a zombie apocalypse?”  The article notes that the rabies virus is capable of inducing zombie-like crazed behavior as the brain is destroyed. Mutation to create new zombie viruses is practically very unlikely. However, the behavior of some people belonging to cults seems almost zombie-like.

“The truth behind alien life on Mars” looks at the significance of methane found there.  Volcanism stopped on Mars hundreds of millions of years ago, so that enhances the likelihood that the methane has an organic source.  But there are inorganic processes involving strong sunlight (in a thin, dry atmosphere) that might explain it.

The article “It’s a UFO, It’s a Bird, It’s a … Cloud” examines the odd-looking holes in cirrus clouds with rainbows inside.  They could be caused by aircraft inducing short-lived snowstorms (not reaching the ground) high in the atmosphere when flying through it.

One of the most interesting is “Looking deeper into near-death visions”. The article notes that as someone passes away, carbon dioxide accumulates in the brain.  Although most people have never reported NDE’s, most NDE cases seem to relate to periods where CO2 accumulated.  However a very few may be different, such as Eben Alexander’s (March 30, 2013) where he had a long-lasting NDE (starting in a blank “Core”) when supposedly completely brain-dead from massive meningitis. There are good arguments in physics that suggest that consciousness somehow continues, possibly as part of a “group”.  There’s the logical observation that it is impossible to conceive of not “existing”.  Some observers note that the brain may be able to function for several hours after the heart stops, which could argue that family members need to stay present and accompany the departing person.  The person may know he or she has passed, and the sense of passage of time (since time is a flexible concept in physics) may be distorted and seem to take infinitely long.