The physical hardcover and softcover book is still alive and well, thank you 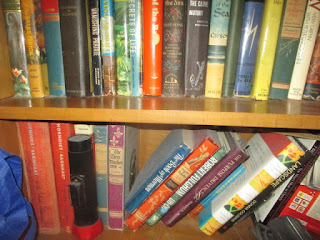 Will physical books go out of fashion because of e-books (Kindle, Nook) and video?

Someone might have asked a question like this in the 80s when audio-books became more popular.  I even recall, when living in Dallas, a friend’s going to a day-long seminar in Waco learning how to promote them!

Nearby, a home has a yard sign “This family is reading with Arlington Public Library”.  Yes, actually going there physically and checking out books (where, “It’s Free”).

There’s another wrinkle to mention, and that is that since 2000 or so, the Library of Congress has paid attention to whether a new book is likely to be purchased by most local public libraries for collections.  Print-on-demand usually is not, so since then most POD books have not gotten catalogue entries there.

I can remember the protocols, back around 1960 or so, as a high school student writing a term paper, the issue of interlibrary loans, and getting on the bus to go downtown (DC) to the main library (near Mount Vernon Place) because I couldn’t find enough at the local county library.

And there was a preference for hardcover, basically because of durability among many uses, as well as more cover art.

Slate has an article in 2013 by Katie Arnold-Ratliff, explaining that publishers see e-books as a boon compared to paperbacks, because used e-books can’t be sold.  Geekwire has a 2015 story explaining why paperback has rebounded.

Quora has a discussion of paper v. hardcover here.

I recently broke my Kindle on a trip and replaced it with a newer model --- and Amazon refreshed it for free.  I find the newer one, with fewer buttons, less easy to use, actually (even if it’s fast).   A few books are available only on Kindle, and it’s a great way to get classic novels (like Arthur C. Clarke sci-fi, or even high school literature stuff) for almost nothing.

Over the years, I've tended to prefer to have paper copies of books, particularly if they have illustrations, have complicated content-structures, or are long.  I typically use a printed index to fund stuff again, and sometimes make hand-written notes before doing a review, on the inside cover.  I'm not likely to pimp them at used-book sales (but I know a lot of people do).


All of this relates to pressure on me in recent months from POD publishers to push sales of my own books specifically in retail stores.  In my case the Kindle and Nook prices are much cheaper than even the paper.  It’s easy for me to encourage people to buy Kindle (at $3.99), but not to buy a 2000 non-fiction policy book in paper at $27.95 (it doesn’t appear to be discounted on Amazon right now, although it sometimes has been).  (My third book is available in hardcover, for $29.95, and hardcover is a must these days with libraries, I have found.)   And, frankly, my kind of content, with its “moralizing”, doesn’t tend to become popular quickly. “Writing to Sell” is a whole topic in itself (and that’s a book by Scott Meredith, literary agent, 1996, from Writer’s Digest).  Some of it is “Write what other people want.”  This whole idea has long been controversial, and was especially so with a NWU group in Minneapolis that I used to attend around 2002-2003.