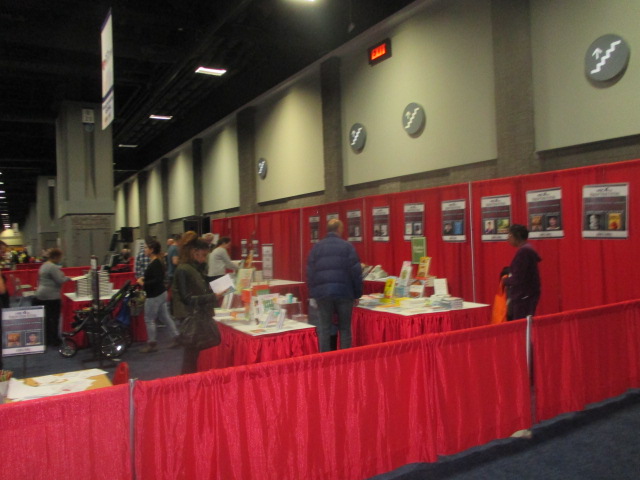 This weekend, the NBC4 Health and Fitness Expo at the Washington DC Convention Center featured a modest “Healthy Book Festival.” I visited it late Saturday afternoon. It was run by the Barnes and Noble bookstore on the Catholic University campus.

But two “events” of some significance developed in the short time that I was there.

I purchased one hardcover, by CNN anchor journalist Tom Foreman: “My Year of Running Dangerously: A Dad, a Daughter, and a Ridiculous Plan”, from Blue Rider Press.  Yes, I’m reminded of the 1982 film about a journalist in peril in SE Asia, “The Year of Living Dangerously”, directed by Peter Weir,  with Mel Gibson, Sigourney Weaver Linda Hunt, a favorite of the late Roger Ebert.

Foreman was present to sign the book.  I will review the book soon in a separate post.  But I want to cover my conversation with him now. I recall Foreman’s covering critical international and domestic crises, and elections.  So I spoke up about the media’s coverage of critical issues regarding the security and stability of our electric power grids and, of course, the Internet derivative of the grids.

The major threats, of a potentially existential character, can come from cyberwar, direct terrorism (especially EMP attacks), and extreme solar storms (like the 19th Century Carrington Event, and we may have missed another one by about a week in the summer of 2012).  I’ve covered all of these in connection to one another on my blogs, especially this one of book reviews, and the reviews can be easily aggregated or correlated from the Blogger label facility. Foreman immediately mentioned Ted Koppel’s “Lights Out” (Nov. 10, 2015).  I’ve covered that, as well other non-fiction accounts and two major novels, as well as technical studies published by Oak Ridge National Laboratory (which I visited in July 2013 personally) and the National Academy of Sciences.  While Koppel’s recent book stresses the cyber-threat, most of the others (except for Dorgan’s novel) stress space weather and EMP as the primary threats.  It’s noteworthy that the EMP threat does not require nuclear detonation, but few sources have covered “conventional” flux weapons, outside of the Washington Times and (back in 2001), Popular Mechanics.  (See my “Cautionary” or “Films on Major Threats to Freedom” blog, Jan. 3, 2016, for more details.)  Much of the problem is augmented by the fact that major transformers cannot be quickly replaced and most are manufactured overseas.

I mentioned to Foreman that none of the major news networks (CNN, Vox, Fox, NBC, ABC, CBS) have really tried to aggregate all of this material and present it to the public in a coherent, systematic manner.  I seem to have covered it about as well as anyone so far.  I will help news networks cover it if they ask me.  (I’ll add that I was formally employed by NBC in the 1970s.)

Our whole civilization has become dependent on electricity and communications, so a global or regional catastrophe of unprecedented dimension is possible, even more urgent than climate change.  Sources of material on these problems are quite credible, and not limited to the right-wing “doomsday prepper” crowd. '

But the mainstream media seems asleep on this issue, as is government (although there are stories abou underground statements from past DHS officials), and particularly political candidates.  Why don’t Donald Trump, Ted Cruz, and Hillary Clinton talk about security for our electric infrastructure?

I can definitely imagine CNN (more than any other network) doing a 2-hour special report on this whole area.  CNN should do it.  Foreman, Anderson Cooper (AC360) or Fareed Zakaria (GPS), for example, could produce and host it.

It is common to find dire prophecies about the financial system, too (as from Porter Stansberry).  These generally are much less credible, unless they were caused by a collapse of physical infrastructure.  (In sum, we’re not in another 2008 right now, but the ability of the developing world to grow given concerns about climate change and debt is indeed cause for great concern.)

Let me move on to one other interesting event Saturday.  I did attend the presentation at 4 PM, which happened to be from Lou Schuler, author of “Strong”, which was being sold at the fair.

Schuler explained how he channeled his writing on fitness to more specific audiences, namely women.  Once he did so, he says he found that sales on older books improved,  which sounds like an unusual observation for the book business.  But Schuler’s narrative, as he explained it at the forum, does show the value of writing for specific audiences, which is not something I do myself.

With a visit to the Westover Market in Arlington VA today, I learned, in the checkout line, that owner David Hicks has authored a book.  I'll look into this more, but here is a link from Outskirts Press.