"The Economics of Immigration", as edited by Benjamin Powell; but more than economics matters to refugees from persecution 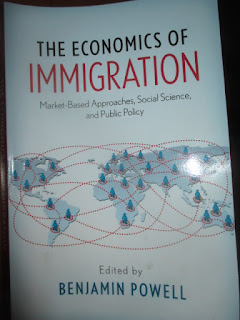 This book was sold at a Cato forum on Jan. 6, 2016 (the forum itself is discussed on the Issues blog that day).  The book contents were written largely before the severity of the Syrian crisis was understood, but the Central American crisis has

The book starts with an Introduction, by the Editor.  There follow two main sections.

“Social Sciences” comprises four essays: “The Economic Effects of International Labor Mobility” by Pater T. Leeson and Zachary Gochenou; “The Fiscal Impact of Immigration” by Alex Nowrasteh; “The Civic and Cultural Assimilationo f Immigrants to the United States” by Jacob Vigdor; “Employment Visa: An International Comparison” by Alexandra Padilla and Nicolas Cachanosky.
Generally, these essays, backed up by peer-reviewed data studies, support the notion that immigration tends to be an economic plus for modern countries.  But incomes of lesser-educated local people may be reduced somewhat.

Then “Immigration’s Future: A Pathway to Legalization and Assimilation” proposes a “grand bargain” in which immigration is limited but a definite plan is offered to help undocumented workers (and “dreamers”) earn the right to stay.  The author does consider assimilation a major challenge.

“A Radical Case for Open Borders” by Bryan Caplan and Vipuk Naik, is just that. But Caplan notes that illegality encourages black markets and excess criminality, in a manner analogous to criticisms of the war on drugs.

The book finishes with  “Conclusion: Alternate Policy Perspectives” by the Editor. He reviews books (as if to write an annotated bibliography for a college class)  by scholars critical of greater immigration (George Borjas, Paul Collier, and Victor Davis Hanson) and then generally supportive (Gordon Hanson, Lant Pritchett, and Michael Clemens).  In general, Powell believes that market forces, rather than separate point systems, should govern immigration.

But all of this is based on abstract policy theories. Indeed, some of the writers address the moral cases (even from the viewpoint of Christianity).  But the real moral problem today is that refugees are fleeing civil war, invasions, extreme religious persecution, conquest, and sometimes even specialized sexual orientation persecution.  The areas of the world with the most attention right now may be Iraq/Syria, and then Central America, or various areas in Africa.  Refugees, if given asylum, may need assistance in finding low level employment, housing, and developing English skills.  Faith-based agencies might pressure individual people to step up and support them, although right now government policy and law may make this illegal in many cases.  (In 1980, the “spare bedrooms” plea was made for the Mariel Boat Lift from Cuba.)  On the other hand, many speakers, mostly on the right, argue, with some substance, that terrorists could hide among the refugees as Trojans.  Reaching out for humanitarian reasons may involve personal risk-taking and sacrifice, and may not always be economically beneficial.