Alec Ross: "The Industries of the Future" 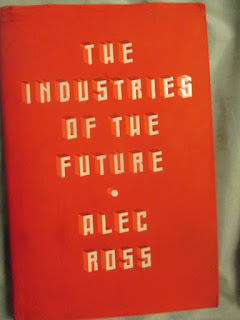 Title: “The Industries of the Future”

Ross starts out by a reminiscing about his coming of age in West Virginia, working as a janitor cleaning up vomit in bars, and noticing the slow death of the coal industry.  While noticing that the illusion of stability was important to families in the past, he loses no time on his own realizing he has to move on. There will be jobs, he says, for the most talented of us.  Humans will become geeks and vice versa.

And toward the end, he says that being a dad (“The Most Important Job You’ll Ever Have” as a Conclusion) has transformed him, but also convinced him that the tremendous changes in the paradigm of civilization really do give the best future for his kids.

Think for a moment, for example, about the student loan debt crisis.  Yes, it’s harder than it used to be for many young adults to start their own lives as independent people let along start families.  But if you have the right skills – particularly if you are fluent with coding – you’re likely to be able to support yourself early, even while in college.  (“Working your way through college” changes as a virtue, even given the old coop programs of the past.) Of course, there’s a risk of coding to support the wrong things.

Coding involves developing abstraction as a part of one’s personality. In a way, it runs counter to connecting to people naturally in a community or family.  That sounds like a psychological hurdle to overcome (as Mark Zuckerberg did).

The six chapters are long and detailed, and pretty much segment his entire world view.

Chapter 1 focuses on robotics, although I think the claims that robots can provide nursing home care (and relieve adult children) are a bit much.

Chapter 2 talks about the “human machine”, particularly with advances in longevity, medicine, as expressed by revolutionary nanotechnologies, which might eventually eliminate most cancers and genetic diseases.  (Teen cancer researcher Jack Andraka (“Breakthrough”, March 18, 2015) has already written about nanobots and has become a comic book character as “NanoMan” in a space helmet.) But we will have to get used to the moral quandaries genetic knowledge and manipulation can lead to.  Will we have a “Brave New World”?  Will marital sex as we know it take on even less meaning? George Gilder had warned about this in the 1980s.

Chapter 3  talking about the “codification of money, markets and trust”.  The last of these is a very important component to how any economy works.  He migrates to a detailed discussion of bitcoin and the math of the block chain ledger.  Despite the abstraction of bitcoin, the infrastructure around it has been breached.  I think it’s likely that any advance civilization would have discovered the block chain. If somehow we could reach aliens with warp drives and trade with them, we would almost certainly use something like bitcoin.

Chapter 4 is the “Code War” which replaces the Cold War.  He actually doesn’t delve into the grim idea that cyberwar could shut down major parts of the power grids (Ted Koppel’s “Lights Out”, Nov. 10, 2015).  So far, the most spectacular attacks have been against big companies (including health insurance companies and hospitals)  and governments.  Hackers could compromise home security systems or any utilities or appliances controlled by remote.  They could compromise implanted digital devices, leading to deaths.  A good question is whether ideologically motivated hackers  to target insular individuals and those connected to them to send new kinds of political messages.  Already, individuals have been affected by ransomware, and some restaurants or small retail businesses have had sites defaced by politically or religious attacks. The designers of the Internet did not envision a world where users would attack one another – partly because they didn’t see the demoralizing effects of inequality, poor job markets overseas, and mass movement mindsets.  Ross could have gone into the issue of online recruiting here.

Chapter 5 is “Data: The Raw Material of the Information Age” of course gets into the big payoff from collecting personal data for advertising.  Doesn’t the immense profitability of companies like Google and Facebook stun everyone?  And much of this business model could be undermined by “do not track”.  In fact, the collection of data is so ubiquitous that the double lives of the past are impossible.  This can have a huge impact on how issues like gay rights (most of all in environments like the military) are argued.  But, as Ross notes, cultural behavioral norms have changed and loosened in tandem.  Ross gives some space to the problems of online reputation management, and the idea that a social media indiscretion in youth can stay out there forever – an unprecedented problem for parents, something the childless don’t see.

Chapter 6 is the geography lesson.  Ross is quite hopeful about the way digital entrepreneurs in Africa can transform the standard of living, both in improving agriculture to arranging microfinance. He sometimes seems to think that authoritarian statist capitalism is pretty successful in raising living standards and creating markets, as in China, sometimes very impressive as with Singapore.  He notes the complexity of bureaucracy in India, and is particularly critical of Vladimir Putin and Russia, which he says is trying to preserve a 19th century world.  He notes the schism within the post Soviet states, most notably the Ukraine, but notes the turnaround in Estonia, where anyone can become an “e-resident”.  Putin's attitude could conceivably give him a motive to bring back the West to 19th century life with EMP attacks, as could some elements of radical Islam.  Ross doesn't get into the psychology of hatred of modernism, but the previous book (Hofferr's) gives you more pieces to connect, on how the loss of mass affiliation affects some people.

Fareed Zakaria recommended this book on his “Global Public Square” on CNN.