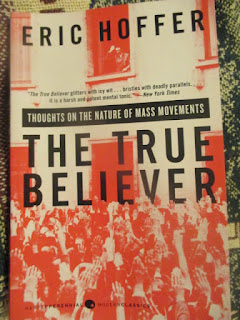 Title: “The True Believer: Thoughts on the Nature of Mass Movements”

The book will be the subject of a forum at the Westover Market in Arlington VA March 21, 2016

Inequality is a moral topic that I have written a lot about (especially in my DADT-III book) but maybe not acted as much as I should. So is “rightsizing”.  There is a general moral consensus in a modern democratic free society that the individual is morally entitled to what he can earn with his own wits. (That’s like saying a wild animal – like the fox that camps in my back yard -- stays healthy living on what he or she can catch or forage, without being fed by external humans and getting diabetes.) But to earn that wealth he or she must meet real or perceived needs, or at least wants, of other real people.  (That’s one observation that makes the “it’s free” culture of the Internet so troubling and maybe unsustainable.)

OK, but even to earn our wealth, we are very unequally situated.  Some of us grow up in wealthier families.  Some of us have “better” genes.  Others are harmed by what others do, or by neglect (example – the water crisis in Flint, MI).  Is it even “moral” to contemplate the moral stature of someone who both starts and finishes further behind in line?  The New Testament seems to be about giving up that kind of “Pharisee” thinking.

The book at hand today was first published just six years after Hiroshima, but it seems to explain a lot of what is going on today, obviously including but not limited to the recruiting for “jihad” by radical Islamic groups like ISIS.  It also explains why people join cults (like Jonestown), although Hoffer doesn’t use the word. (I am reminded of Walter Martin’s “Kingdom of the Cults” from the 1980s – where he regards then LDS church as a cult but not the Seventh Day Adventists.)

In the first Part, Hoffer argues, when talking about “the poor”, that in most cultures throughout human history, the “poor” tended to live relatively communally and equally among themselves. 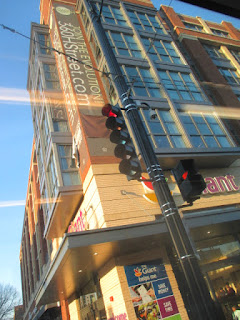 Typically, they experienced some sort of collective identity or national pride.  When this worked, society tended to be peaceful.  The individual, he points out, was not really conscious of his own lack of freedom (by today’s standards) and expected little in the way of opportunity for personal recognition or public self-expression. Freedom, Hoffer points out, could be “irksome”, leading to opportunities to fail and fall through the cracks.  It was the identity of the group that mattered, not of “you”.   But when abuse by rulers or external enemies or other disasters broke things down, then some people could promise better futures if the people would rebel.  Usually there was some kind of enemy or “other” – the bourgeoisie, foreigners, people of other races, or religions.  Often, membership in the group was marked by obedience to a personal moral code that confined the individual. It might be religious (like fundamentalism in any religion, most of all Islam), or it could be political (communism, or national socialism).

There are many examples of group identity that seem constructive.  It could be rooting for a sports team (the “Fighting Irish”)  We could compare ourselves to orcas, whom biologists say have a “distributed sense of consciousness”.

On p. 100, Hoffel writes, "... when we renounce the self and become part of a compact whole, we not only renounce personal advantage, but we are also rid of personal responsibility."

But Boston bomber Dzhokhar Tsarnaev wrote inside the boat where he hid before capture, that one Muslim is part of the body of all Muslims and must share in the fate of all.

That sort of thinking does make a lot of people, especially less well educated or well-off young men tick. Western individualism becomes an unwelcome influence, not directly because of colonialism or exploitation as it is usually condemned by the “People’s” Left, or because of theological reasons themselves, but because it breaks up the collective cohesion of the group, presents young men with the possibility of choices that they cannot possibly make wisely.

On p. 33, paragraph 29, Hoffer writes, “Where freedom is real, equality is the passion of the masses. Where equality is real, freedom is the passion of a small minority.  Equality without freedom creates a more stable social structure than freedom without equality.”  I wrote a similar idea in my DADT-III book, but noted that freedom, when allowing inequality, promotes innovation that raises living standards for everyone.  Trickle down trickles for a while, but not enough.  The better off need to give back, and it gets personal.

But even this analysis stalls out in Hoffer’s own analysis.  It’s not just inequality, it’s that other cultures don’t want to be conscious of the idea at all.  Coexistence with a rich liberal intellectual in the West becomes difficult. But inevitably, every group (where tribal as with much of Islam, or the former Soviet Union) makes demands of its own members and punishes those who don’t comply, sometimes exterminating them.  It’s impossible for them to maintain forever that individuals don’t matter.  But the idea, of joining a brotherhood, becomes enticing to young men living in “rich” societies whose values don’t give them a chance to compete or which don’t make sense to them. 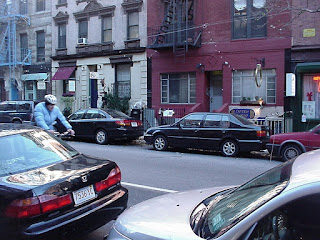 Hoffer doesn't specifically address homosexuality (this is 1951), but most political mass movements express homophobia because they see gay values as an affront to the procreative future and cultural identity of the entire group, and have little concern about the immediate effects on individual members. In the political or religious area, liberation often results in new oppression. But it is possible to construe liberal mass movements, like feminism, as something you "join" as a group experience.  But there is a difference between the "solidarity" that political activism usually demands, and the sense of national or religious identity that drives some more radical cult-like movements like ISIS.

Later, Hoffer explains radicalism in terms of personality character specialization.  He talks about “men of action”, and “men of words”.  These correspond roughly to the polarities set up by Paul Rosenfels (April 12, 2006), as “masculine” and “feminine”, or perhaps “balanced” and “unbalanced”.  In factm Hoffer’s writing style and book organization, dividing his presentation into little sections and often writing paragraphs almost as mathematical proofs, resembles Rosenfels, whom I believe had studied Hoffer as I recall from my days at the Ninth Street Center in the 1970s.  Hoffer lays out he ways both personality types can rescue themselves from self-annihilation as well as the ways they sink further.  “Men of words” who fail at gaining the success they want or who are too spread out in their scope (that could be me) can become vulnerable to fanaticism. Hoffer often explains how joining mass movements, and then offering self-sacrifice, or joining in with proselytizing or enemy-spotting, is connected with keeping any inner self (a very important idea in Rosenfels) obliterated and “not showing.”  It should come as no surprise that revolutions often result in regimes more repressive than those that they had just replaced.