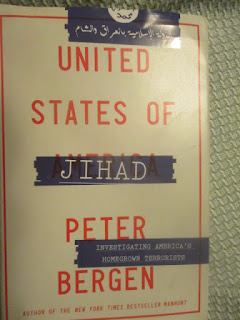 The author, CNN’s national security analyst and well-known from the days of covering 9/11, examines the question of American Muslims becoming radicalized, and then attempting terror attacks, often “lone wolf” in nature, but sometimes, in recent years, attempting to travel to Syria.  It is true that the United States does not have the volume problem that Europe does with returning extremists, and that the Muslim community in the US is much better integrated than in Europe. But the appeal of “jihad” to some people is quite troubling and hard to explain.  I’ll add that, over decades from the 1970s through the end of 2001 when I worked in I.T. at various companies, I worked with a number of people from Pakistan and other Muslim countries, and never experienced a hint of religious fervor (which I did experience from some evangelical Christians).

He covers a number of specific perpetrators, such as Nader Hasan, an Army psychiatrist who turned on his own at Fort Hood, TX in 2009, to the Boston Marathon bombers and the San Bernadino couple, covering history until the end of 2015.

Although we hear a lot about troubled young men (and women) being recruited on social media and going dark, over the years it is apparent that a number of terrorists have been relatively well off and well educated.  In some cases, it seems that the motive relates to joining a cause “greater than self” and belonging to a group.  Peggy Noonan writes in the WSJ March 26, talking about radical Islamic jihadism, sayimg  that to many of us in the west, religion isn’t that important, so we have “trouble taking it seriously as a motivation of others.”  Joining a religious cause may be an experience of eusociality (Eric Hoffer, March 6), and adherence to rigorous standards of a religion fundamentalist system may protect the personality from having to deal with unwelcome intimacy from others when they get in trouble – and may give “meaning” to everything.

Still, Bergen gives examples where “joining a cause” was really hardly at issue – the Tsarnaev brothers – the idea of vicarious victimization and simply weak, narcissistic personalities.  Bergen refers to the younger Tsarnaev only as “Jahar” – the “stress-free kind of guy” who never showed remorse and who took the judge’s final lecture at hearing the death sentence as a kind of afterthought.  Really, he was just apathetic.  I’ve seen that before.  It makes me grateful that my own friends accomplish things as individuals, and I can love them even when there have been disagreements.

So has Bergen answered the question, posed especially by Donald Trump, “why do they hate us so much?”  Is it desire for expropriation through revolution?  That was more like Bolshevism.  Is it really, as Noonan says, really about religion as a defining force for one’s life?  Maybe, but Bergen’s narratives of the kinds of lives young jihadists are promised in Syria (free rent, health care, and brides, and power over others) – as already shown on CNN’s film “Blindsided” (“cf” blog, May 11, 2015)  -- shows how enticing merely “joining up” can be.

A few of the detailed narratives in the book are really unusually disturbing.  One is the story of Molly Norris, having to disappear and change her identity after she became a target for sponsoring the Muhammad drawing contest.  Another is the story of another target, Pamela Geller, who was kept from entering the United Kingdom because of the content of the books she had authored.

At the end, Bergen considers local jihad a low-level threat, not of the existential nature of the Civil War, Nazi Germany or the Soviet Union.  Given the growing concern of access to WMD’s – especially dirty bombs and EMP devices, which really can wreck our civilization as we know it, I would not be complacent. I rather agree with Peggy Noonan (WSJ Saturday)..  Having maybe a million people in the world who really would deploy something like this if they could has to be very dangerous. In fact, there are reports from a UK newspaper that two nuclear power plant employees from Belgium had joined ISIS and another was murdered (story by Jennifer Newton in Mail).

I am 72 and most of my adult life, the world has been a much more stable place for me than it has been for most people, here in the U.S.  I don't think that stability, and sense of personal control of one's life, could continue if thee was one major dirty bomb or EMP or major biological attack in the U.S,  Eric Hoffer's (March 6) idea that when people join mass movements like ISIS, they give up personal advantage and individualized self for the experience of belonging to a winning, redeeming or apocalyptic cuase, with the bonus of relief from the personal responsibility that comes with choice.  Think again about Jahar's chicken-scratching inside that boat in Boston