"The Story of Jesus" from NatGeo and Time 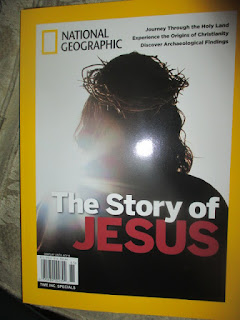 National Geographic and Time have produced a coffee table paperback for Easter, “The Story of Jesus”, edited by Bridget English Hamilton, 112 pages, very heavily illustrated photographs, maps, and realistic drawings of the people. Jesus is drawn as handsome, bearded, and white, and looking about 35.  Christianity does not object to drawings or images of Christ (it does not consider merely creating an image as “idol worship”) but some people feel that most images of Jesus conform to cultural (and racial) stereotypes about what is “desirable” to see in young adult males.

I’ll backtrack and mention that, back in the 1950s, in Sunday School we often had four story books (from the Judson Press) a year, color coded.  In Fall, the book had a red cover, and covered the entire Old Testament, ending with the Christmas story.  In Winter (through March), the cover was blue and covered the life of Jesus, up to the Passion and Crucifixion and Resurrection. In Spring, the cover was green and started with the Ascension or Pentecost and continued through the Acts.  Summer was orange and covered a bit of everything (except baseball, maybe).  Many churches over the years would follow a pattern of liturgical colors throughout the year.

This book is pretty straightforward but detailed, covering a lot of sensitive points (like the legal basis for the trial of Jesus before Pilate).  The authors seem to like the book of Mark the most, but mention the apocrypha and various gospels not part of the standard Bible (but generally most of them have become the subjects of cable movies by now).

There are two particularly amazing things that I would have noticed had I lived then.  Had I been “called”, I would have “worshiped” Jesus through a process psychologists call “upward affiliation” (which, unchecked, can skirt the dangers of idolatry).  Yet, I would have found it hard to become “fishers of men”.  I would rather win arguments than win converts, as a lot of people who know me will attest.

The other thing would have been that, besides witnessing miracles (and I think I have witnessed two in my own lifetime – in 1979 and 2012, and will not be more specific), being there for the Resurrection and Ascension would have “settled things” as for as the need for Truth about the Universe. Today, we have relativity, quantum theory, and cosmology.  I think this all reconciles. I think physics demands that consciousness persists after “death”, when, right now, we find out “what is really out there.”  Future generations may have the chance to learn this while living. Perhaps there will be (another) interaction with “aliens” who turn out to be “angels”. 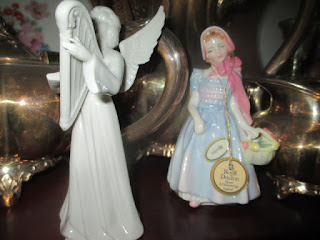