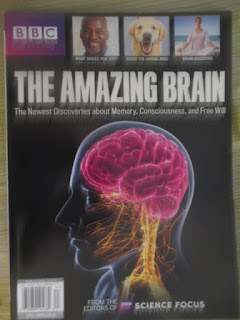 The BBC offers an interesting supermarket counter booklet “The Amazing Brain: The Newest Discoveries About Memory, Consciousness, and Free Will”, from the editors of Science Focus,
The booklet has three parts: Neuroscience, Mental Health, and Future Minds.

The Neuroscience part includes two important essays, “What Makes You, You” (by Rita Carter), and “Free Will: The Greatest Illusion” (by Simon Crompton), and “Memory” by Nicola Davies.  The material tends to follow a strictly physical explanation of consciousness and of personality types.  Extroversion, conscientiousness, and anxiety are all connected to concentrations of neurons in specific areas of the brain.  “Free will” is said to be an illusion of numbers.  Although, a lot of us think that a feral cat who adopts a new owner is showing free will.

Identity has always been a bit of a puzzle.  If “I” commit a crime and go to jail, it is “I” who experiences the imprisonment.  It was “I” who felt the ritual of danger of basic training.  If I get hurt, it is “I” who feels the pain.  All of this seems to have something to do with the idea of irreversible causality in physics (which makes reversible time travel impossible).  There is no way I can wake up and have the body of a 21-year-old friend.

The Mental Health book has a chapter on Addiction, and Alzheimer’s Disease (Robert Matthews).

Huffington Post has an article about how microtubules inside neurons resonate with a quantum universe.  This is “Jack Andraka” nano-man type stuff, but the article is a good summary.

I wanted to give a couple of links on whether consciousness survives death.  Here’s one on Quora, and another by Sam Parnia at Southampton University in England, showing consciousness surviving total stoppage of the heart for at least several minutes.  It’s quite likely that we know that we have died, for some time, and that time might seem to stop.

Another thing to look at is distributed consciousness.  This is best known maybe in social insect colonies.  Because insect colonies usually center around one or a few queens, all are relatives, so social organization reduces the need for individualization of the brains of individual workers.  In vertebrates, social groups include non-relatives, so increases the need for complex brain capacities, to function both as an individual and as a member of the group (the old elementary school report card problem). But dolphins and killer whales may have their own distributed sense of self on top of their individual personalities, that is much stronger than for humans.  A comparison of dogs and cats shows how social interaction affects brain and learning capacities in otherwise somewhat similar animals.