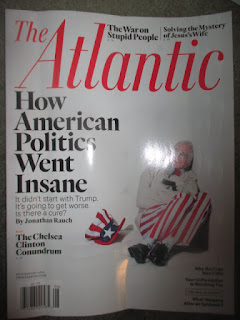 The July-August 2016 Atlantic had three booklet-like stories that caught my attention.

The most flagrant was David H. Freeman’s article “The War on Stupid People” on p. 13. “As the intellectually gifted reap ever greater rewards, we are beginning to mistake smarts for human worth.” I thought, no, Milo Yiannopoulos never said this.  True, not just Mark Zuckerberg but now people like Jack Andraka enjoy the limelight and quick financial rewards of their smarts in youth. But that’s turnabout from a time when being smart wasn’t cool.

Trump himself pitted “Book smarts” against “Street smarts” on “The Apprentice”.  I was actually called “stupid” by a couple people in Army Basic back in 1968.  Some people thought I was behind, when they came from a way-off base point (one of them had to do with “who had the spirit” at a church campfire in Texas.)

But a lot of the “whitelash” during the election concerned working people who felt left out by the intellectual “elite” who have never had a rite of passage or gotten their hands duty.
And some of it comes from certain parts of the evangelical community who want to deny science because it confounds their “simple faith.”

It sounds stupid to chant “lock her up” or “Build that wall” as part of a mob at a rally.

But I recall as a child, it you said “You, stupid”, your parents would wash out your mouth with soap.

Then, on p. 51, there is “What’s Ailing American Politics”, aka “How American Politics Went Insane” by gay libertarian author Jonathan Rauch (who had authored “Gay Marriage: Why It Is Good for Gays, Good for Straights, and Good for America” back in 2004, pubbed by Henry Holt).  Rauch talks about the complete backroom deals in smoke-filled rooms in the past – like we need that now for network neutrality. But the end result seems to be the problem that intellectual people don’t want to run for office and get people to give them money.  Of course, there is gerrymandering. It’s weak parties and strong partisanship (that is, tribalism).

And Peter Beinart opines with “The White Strategy” on p. 81

Link for letters on all three pieces is here.