NatGeo: "Gender Revolution: The Gender Issue": It's complete, and some say it's controversial 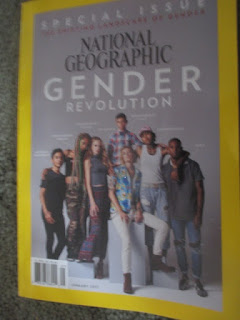 The January 2017 issue of National Geographic is a special one, “Gender Revolution: The Gender Issue”.

There are many chapters, by Eve Conant, Tina Rosenbrg, Chip Brown, Alexis Okeowo.

There are introductions by Suan Goldberg, Gloria Steinem, and particularly and Facebook COO Sheyrl Sandberg’s “The Power of Peers”.

There is a vocabulary page, “A Portrait of Gender Today”, from “The Teaching Transgender Toolkit”.
There is an early section about gender-related toys. 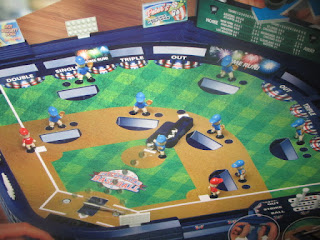 Soon the issue gets into gender ambiguity among animals, which is quite common in invertebrates.

It also compares countries for gender equality, and the richest countries are not always the most equal.

The section “Rethinking Gender” presents two twins, one of whom is male-to-female trans as a teen.

Later the booklet notes “A recent survey of a thousand millennials found that half of them think gender is a spectrum.” 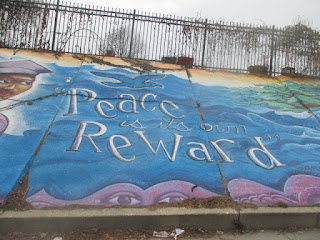 There is a world map on p 65 showing the legality of gender change by country. “Legal with no restrictions” applies in only five countries.

The most provocative chapter starts on p. 74 with “Making a Man”.  There is a detailed account of a boy in western Kenya leading up to his circumcision ritual, which even includes some bizarre homoerotic followup.

On p. 90, there is a mural, “Many Paths to Manhood”, which compares the rites of passage among different cultures in history and compares to present day in some parts of the world.  These include Sparta (where boys had to pass a “survival of the fittest” war culture), Rome (where marriage and children were mandatory for citizenship), the Middle Ages, Native Americans, and the Mafia, which it compares to ISIS.

On p. 97 Chip Brown asks why boys go through such extreme manhood rites, often exuding mindless collective fungibility (like Jahar’s “boat manifesto”)  “The disquieting answer is, of course, to prepare for war.  As anthropologist David Gilmore notes, where resources are scarce and the collective welfare uncertain, ‘gender ideology reflects the conditions of life.’”

But the last section, by Tina Rosenberg, is “American Girl”.

There is also a section on “Dads at Home”.  There are studies which show that fathers’ testosterone levels drop when they are caring for children, a point that the Family Research Council is willing to promote.

Some people (on the social-political or particularly religious “right”) have criticized the issue, claiming that gender ambiguity should not be promoted but viewed as a “handicap” sometimes.