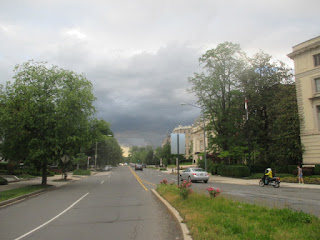 The Kramerbooks and Afterwoods Café, just north of Dupont Circle on Connecticut Ave. in Washington DC, has a new owner, Steve Salis, who also found “&pizza” (story in my IT jobs blog yesterday).

There are reports of some dissent among employees, and Salis seems to have an interest in items that would be bigger volume sellers, like children’s books.  The Washington Post has a major local story by Abha Bhattari Monday.

I’ve been in the store many times.  There are stacks of books on all sorts of non-fiction political, scientific, social, psychological, LGBT, and other topics.  I do not recall seeing any of my own authored DADT there, although I believe my third book was pitched there is a recent bookstore marketing campaign.  Kramerbooks tried to expand in the Clarendon area of Arlington about ten years ago, and had a store there for about a year.

Lambda Rising, the gay bookstore, used to live one block to the north. It closed in 2010. Specialty independent books stores have a hard time competing against online retailers, especially with books online through Kindle and Nook.  It’s former owner, Deacon Maccubbin, was supposed to write a book (Citypaper story),  But I don’t see a book by him on Amazon (ironically) yet.  Milo will beat him to press.

In the meantime, some self-publishing companies (like Author Solutions) have been trying to pressure authors (especially since about 2012) to work harder to actually sell physical books to stores rather than live in cyberspace, as if on a Dyson’s Sphere.  It’s really not feasible for so many self-published authors to support families selling books, and employees of publishing companies, in this age of Trumo-ism and MAGA, have to wonder about their own holding patterns.  You simply can’t stop change.  .