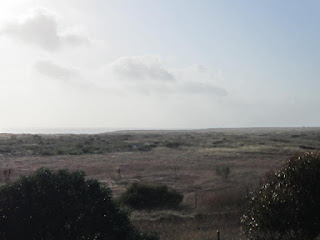 During my first year of employment at USLICO in Arlington in 1990 (what would become my last main job, for 12 years and four owners), I read the Dean Koontz 1989 novel “Midnight”, and shared it (paper, Putnam was original publisher) with a few people in production control in what would become a coffee break book club.

The novel is remarkable in its huge number of chapters, and organization into three parts each with its own chapter 1.

The novel starts with a jogger running in a California beach town (Moonlight Cove  -- “In the Moonlight, Do Me” indeed) being attacked by a mysterious alien-like creature, and soon the mystery, somewhat in a “Twin Peaks” -like fashion, is examined from the viewpoint of various characters, whose narratives gradually connect.  (Irving Wallace had used this technique for building plots for Cold War spy novels back in the 1960s).  It seems as though people are getting converted into hybrid creatures and that a sociopathic computer scientist Shaddock is involved.

I would have thought that this novel would make a good miniseries on a cable channel,, even today, as the premise has less dependence on political circumstances and even technology than most sci-fi suspense novels.  Koontz sometimes gets into Shaddack’s head, anticipating the psyche of a modern terrorist, deflecting the social issues (like gay rights in one passage) in surprising ways.
I mention the novel because Koontz is often heralded in some circles as the ideal author who writes strictly to sell, and he indeed has a huge career of a long list of novels, divided into various subcategories of suspense.   Literary agents love his approach, because it is so commercial.  So do trade publishers.

One problem with developing suspense novels is that sometimes they become very vulnerable to changes in world politics, which can come suddenly and be largely unexpected by suspense authors, like the fall of the Soviet Union at the end of 1991.  Today it’s not clear who is the biggest threat: North Korea, Iran, ISIS, Russia, China.

I’ve had that problem, and my own approach to fiction has to start with my own narrative first.  I make no apologies, despite the disruptive advice and sales calls from others.