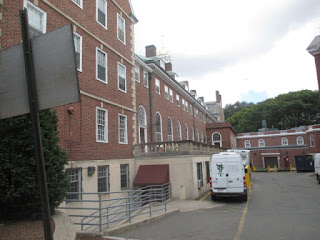 A 691-page dissertation by a Harvard Business School professor needs a book preview here. That is specifically, “The Age of Surveillance Capitalism: The Fight for a Human Future at the New Frontier of Power”, by Shoshana Zuboff, hardcover, Public Affairs, New York, 2019, ISBN 978-1-61039-569-4.  . The book has four large parts and eighteen chapters. Here's a detailed sample review on the Intercept by Sam Biddle.

And her writing style is like mine, especially in my “Do Ask Do Tell” books and she gets into some of “m”" old themes and takes them much further. I’ll do a full review on Wordpress when I’m done.

But I wanted to note some highlights.

There is a Definition page for Surveillance Capitalism, that serves the same purpose as the Hamlet battlefield quote (“fust in us unused”) in my own DADT-1 book. But the alternative dictionary definitions are all rather Marxist.  Does the Axiom of Choice follow? 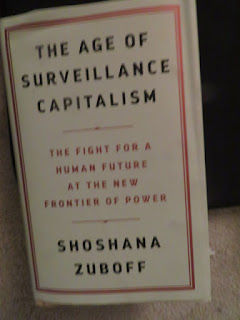 Harvard undergraduate John Fish (computer science major) recently said in one of his Friday afternoon videos that managerial capitalism isn’t just replaced by surveillance capitalism – it’s that transactional capitalism is replaced by attention capitalism – like attention compares to dark matter in the Universe. Well, transactional life is the heart of Nassim Nicholas Taleb’s “skin in the game”; attention capture is just virtue signaling.  “Economic Invincibility” is bound to do a video on these ideas soon.  It’s hard to apply Thomas Piketty’s “Capital” (2014/7/22) to its dark version.

Here exposition is Taleb-like.  The paradigm for surveillance capitalism is unprecedented.  But so were many other stages of social development.  Zuboff describes how the basic essence of individual self-concept must have evolved among her ancestors, when a century ago you were born into roles that you didn’t question and had no individual right to be heard; you were part of a tribe.  But modernity went through three phases, she writes, the first one recognized by Ayn Rand as making way for individualism. But individualization is not the same thing as individualism. The irony of surveillance capitalism is that it drive everyone back to life in a hive (like on the spaceship in the 1996 movie “Independence Day”, where Bill Pullman is much less convincing as president than a future David Hogg.

She points to the date of Wednesday, August 9, 2011 as important for several reasons, one of which was the establishment of “the right to be forgotten” in Europe.  That has mattered a lot in my own “second career”.

But I wanted to jump to the conclusion, “A Coup from Above” (that is, "a manifesto"), where she deploys the epigram “No More!”, which is lifted right out of David Hogg’s amazing speech to the March of our Lives crowd in Washington March 24, 2018.


Hogg starts as a freshman at Harvard in the fall of 2019 after his gap year and surely will have courses from her. But he has already started running for president himself, at 17. And it’s surveillance capitalism that gives “the young people” every advantage for winning.