Time: "The Science of Memory": what makes a person 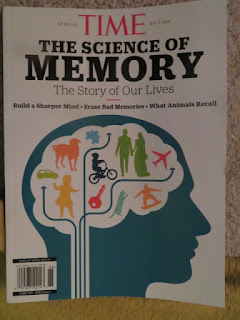 Highly recommended from the supermarket is the Time booklet “The Science of Memory: The Story of our Lives”.  The subtitle is “Build a Sharper Mind; Erase Bad Memories; What Animals Recall”. The editor is Edward Feisenthal, for 96 pages.  There are four chapters with many sections.

On p. 22, there is a short piece “An Elephant Never Forgets” (Courtney Mifsud), which explains why for a pachyderm, the elephant has intelligence and self-identity approaching man.  It’s comparable to cetaceans and apes.  There are other facts: chimpanzees remember some details better than humans.

When I lived in Dallas in a garden apartment in 1979, I was adopted by a tomcat (“Timmy”), who recognized the sound of my car and ran to my apartment door when he heard it.  He would disappear for a few days and then return, to look after me, bringing trophy birds. He had a rich vocabulary of sounds and at night could come into the bedroom and communicate he needed to go outside for the bathroom.

On p. 67, Joshua Foer describes “The Battle of the Big Brains”, and memory contests. But consider how world chess champion Magnus Carlsen can play multiple simultaneous chess games while blindfolded, even winning complicated endgames. He tells journalists that he is always pondering some theoretical position in his mind all the time.

On p. 42 Su Meck and Daniel de Vise present “A Life Lost to Amnesia”.  In 1988 a ceiling fan fell on Meck, costing her all previous memories. She had both retrograde and anteretrograde amnesia. They recovered only very slowly.

Patrick Rogers, on p. 37, looks at why we forget most of our early childhood memories, even though as toddlers we have them.  My earliest memory may be of my father opening an electric train set when I was 3 on Christmas morning in 1946. I have some kindergarten memories at age 5 (the red chair), but in grade school there is more continuity as I become a person.  To a child or teen, school seems indefinite and time passes slowly, because that’s what he or she knows. School and home is the universe. An older person makes up for lack of quickness and immediacy of short term memory with a rich database of a lifetime of experience, as if one could watch a video of a typical day of any period in one’s life. In the space-time sense, they seem equidistant.

Even during a lucid dream (especially if of a desired intimacy, or of a problematic escape situation) one feels like the same person with the same identity. Then memories of many dreams disappear suddenly unless written down, erased from experience. But some remain for life.

The adult brain is fully formed by age 25.  But how do you explain prodigies?  Jack Andraka not only invented a major medical test at age 15 for science fair; he keeps up with school work even as an undergraduate at Stanford while globetrotting.  Taylor Wilson demonstrating knowledge of physics and engineering to build a fusion reactor (effectively a sun) in his garage at age 14. David Hogg was dyslexic until puberty, when he suddenly blossomed into a teen able (getting started at 17) to lead a revolution against the gun lobby and outwit lobbyists and conservative media personalities, putting some on the ropes.