"A Guide to Allyship" (for Black Lives Matter): it is indeed very confrontational and "collectivist" 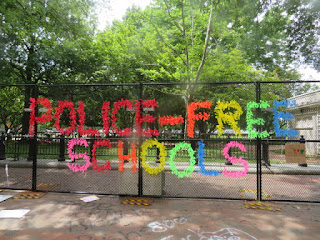 “A Guide to Allyship: A Guide to ‘Black Lives Matter’ and Why ‘All Cops Are Bastards’”: What Happened on May 25th? -- was suggested to me on Facebook.

This is a Google Doc that is essentially a booklet. It has been posted by Nicel Mohammed-Hinds on Facebook, but I am not sure if she is the author.

But the page-booklet certainly grabs your attention. It does give justification for the idea that some protesting needs to be violent, and that people who have losses imposed on them need to realize they are learning what it is like to lose privilege and be like everybody else.  Yes, it sounds Maoist.

I don’t encourage anyone to follow this, but you should know about it and understand where it is coming from.

Breonna Taylor's murder in Kentucky in March sounds every bit as outrageous (maybe even more) but did not get as much attention at the time.  Protests then might have stopped the lockdowns.

R.H. Lussin writes in The Nation (paywall), “In Defense of Destroying Property: We Cannot Conflate the Destruction of Plateglass with the Violence that Is Being Protested”.

Andrew Sullivan writes in NY Magazine: The Intelligencer, “Is There Still Room for Debate?” and talks about the need for “moral clarity.” To be woke is to recognize that everything is “oppression or resistance”.  At an individual level it is not.  But you have to have your own agency outside of a group or mob. (My William and Mary expulsion in 1961 is a good case in point.)  “White Silence = Violence.”  But so was my skipping out on a hazing ceremony.)  Sullivan also talks about Trump’s Plummet.