Pueyo offers a new paper, examining the "herd immunity" approach to coronavirus, rather than his "Hammer and Dance" 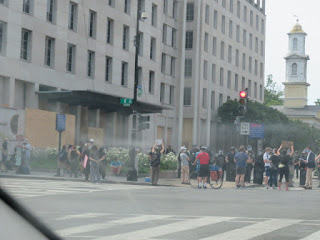 Tomas Pueyo has offered another detailed mathematical article updating his “Hammer and Dance” strategy for controlling coronavirus. That is, “Coronavirus: Should We Aim for Herd Immunity like Sweden?”

Pueyo argues that the United States (partly because of its federalism and the political difficulty of doing uniform policies, even from an authoritarian like Trump) is effectively following a “herd immunity” approach as many states, particularly away from the coasts, are re-opening their economies without convincing evidence that they have put the pandemic under control.

He offers a very interesting chart at the end, color-coded, showing the progress of each state in number of (confirmed) cases per day. New York and New Jersey have improved recently because they did take stricter measures than did, say, southern states.

Pueyo does not believe that the U.S. should or will return to lockdowns with future waves, but believes states should ban out-of-state visits by quarantine threats from hot areas.

Personally, I believe that there are more people getting “trivial infections” (including those who lose smell for one or two days and then regain it) where their immune systems do catch it in time, than is being reported. These are not asymptomatic (which also happens) but fortunately short-term symptomatic, which usually doesn’t get medical attention and doesn’t get tested (in the U.S.)  Some of this perspective is based on my own conversations with people in Zoom sessions.  I think more attention is needed to T-cell health (the virus can enter T-cells but cannot reproduce inside them, compared to HIV).

I also believe that in general countries have not paid attention to the tremendous economic losses or personalized conscriptive sacrifices incurred to citizens caught in "quarantine traps" against their will (when they are not even sick); there is not nearly enough attention to compensating them.  It is true that in the US, the various state "stay and home" or even "shelter in place" (a leading term) orders were not as draconian in practice as in other countries, and neither is the contact tracing. Were I in some of the other countries, I probably would have lost my Internet work, which I might not have been able to maintain or been allowed to stay up (and there are indications tech companies in the US are having more trouble keeping up than they have been letting on -- starting with Cox).

Pueyo, born in France, has engineering degrees from Stanford and is “young” (age 38).  I would wonder if he has met  or communicated with Jack Andraka (now a graduate student at Stanford working on the wastewater issue, not sure of his future plans yet judging from social media), Avi Schiffmann (who has developed and maintained one of the world’s largest coronavirus statistics databases, as a teenager, and also maintains a list of activist and charitable groups), and, for example, John Fish (previous post). I don’t find a Wikipedia article for Pueyo, which surprises me.

Notice his other papers, esp. the one April 1 about the U.S., where he compares the coronavirus to an invading enemy of secret agents.