"Silas Marner": That little novel from high school English class -- and a fable about accidental parenting 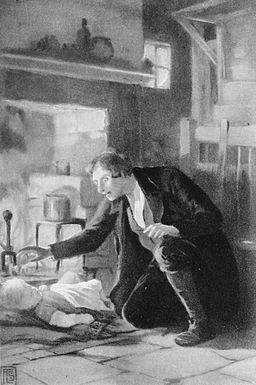 In 10th grade English, starting in the fall of 1958 at Washington-Lee (now Washington-Liberty) high school in Arlington VA, we first read “Julius Ceasar” (Shakespeare) and then took on “the novel”, that is “Silas Marne: The Weaver of Raveloe” (1861) by George Elliot (Mary Ann Evans).

The plot in this relatively short novel is rather intricate and deals with the misfortunes of a relatively modest man Silas, who is framed for crimes and loses his savings.  In the middle of the novel, he rescues a small girl (Eppie) from another tragedy and raises her.  Becoming a parent while otherwise childless himself (and not have ever had the chance to have his “masculinity” validated in more usual ways) becomes an existential challenge which he accepts.

I can remember quizzes and I think we had two tests on the novel (just like we did for the Shakespeare).  Later we would move on to reading short stories.

I do remember that many of the quiz questions involved Eppie and the lost cache of gold, and some of the other familial relations in the novel.  I think that on the final exam there was an essay question concerning stepping up into parenthood.  (The teacher was a young male and former football player but quite articulate.)  Given the course of my life since then, it sounds a but ironic.