"What the Hell Is Happening in Portland?" Now (The Cut in New York Magazine narrative) 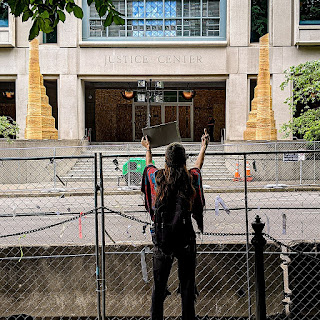 Madeleine Aggeler writes a long account of the violence this week in Portland Oregon after Trump sent in federal troops, apparently to protect ICE or federal buildings and monuments, in New York Magazine (digital subscription $50 year now), a column called “The Cut”. The article is titled "What the Hell Is Happening in Portland?" (Now)

The article includes graphic accounts of injuries to protesters, including a skull fracture.

The political leadership of Portland has condemned the federal intervention, but in many confrontations in the past local law enforcement was unable to protect private businesses, which seem to be extorted to join some sort of Marxist revolution which despises private property and business and wants everyone to join their “suffering” (Maoism).

Portland Independent Documentarians has a lot of short clips on Twitter of the newest riots.

The article has a detailed depiction of the “Wall of Moms” protecting protesters.