"Will He Go? Trump and the Looming Election Meltdown in 2020"; Vox interviews Lawrence Douglas; maybe in 12 hours we'll know??? 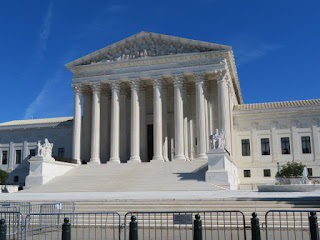 Law professor Lawrence Douglas lays out an alarming scenario in his book "Will He Go? Trump and the Looming Election Meltdown in 2020."

Sean Illing interviews him for Vox in this article.

The book is brief (160 pages) and comes from the publisher “Twelve”, which I believe Sebastian Junger has used.

The biggest problem seems to be that a battleground state could send in competing results.  But federal law says the governor’s certification is what counts (which in Michigan, would be Democratic). Even Amy Coney Barrett would have to concur with that.

All major factcheckers are reporting today that it is normal for some states to be uncertain as to electoral outcome for several days up to a few weeks (2000, Florida) for an outcome if it is very close.

However, Trump seems obstinate because his “base” counts on him to protect them from “expropriation” by others (on the Left).