"The Truth about Mussolini and Fascism", by Martin Goldberg 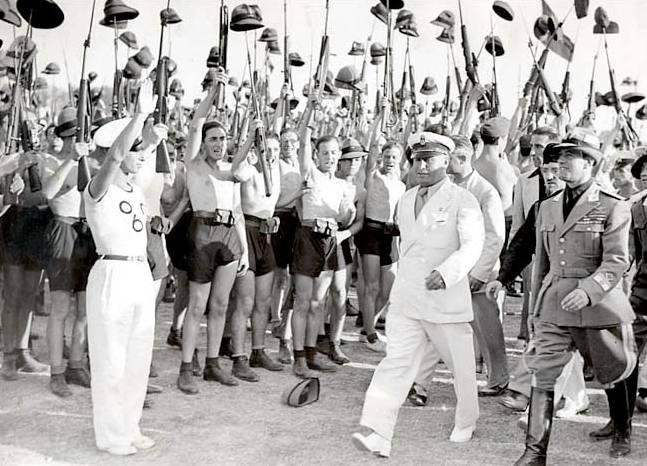 Title: “The Truth about Mussolini and Fascism”

The author has a YouTube channel under his own name, and it used to be called “Economic Invincibility”. Generally his perspectives on how individuals should behave given the polarization and anger of our times sounds pretty sound to me.  He sounds like a conservative, although he says he is not; be is willing to challenge over investment in individualism and isolated personal responsibility, able to criticize Jordan Peterson’s idea of “clean your room”.

Apparently, he was born in Italy but raised in the US.  He apparently has a career in software support, and bought a house “somewhere in the South” (I think it’s Florida).

He says he spent eleven years working on this book, to clear up what he say are misconceptions about fascism in Italy.  When it started, the far Left (that is communists) were doing destruction on ordinary people, which the “fascists” stopped.  Stalin was seen as the big threat.   He says Mussolini and his team, so to speak, put an end to slavery in Ethiopia.

He says that World War II (and probably I) as motivated by the oppression caused by the western nation’s financial system.

The last chapter has the attention-getting title “The Fascist legacy”.  The last sentence is “Sometimes tyranny is a vessel of peace, and freedom the herald of war”.  He does not really connect directly the experience of Italy with everyone today.  But once can presume some things.  Everyone grows up in some kind of community, which should envelop a family. The sustainability of the community matters.  Population demographics, and low birth rates in more affluent people leads to unhealthful dependence on foreign sources of manual labor (as if this sounds like a bit of autarky).  In a sense, this sounds like the conservative side of critical theory, because your extended community / country could commit or have recently committed wrongs that you personally could be assessed for (that sounds like reparations).  Fascism, even when “soft” (like Hungary, Poland. Etc today) presumes people have some moral obligation to remain fit, and to take care of others immediately around them (the “natural family”) rather leave it to the rest of the world.  Fascism would seem to contradict over-investment in personal self-concept or agency (although less so than communism) outside of a structure place in society. On pp 10-11, the author cites writings saying that the individual exists but his purposes must be circumscribed by the needs of the overall state or nation.

Here is a YouTube link where he describes his book.  Listen to the end where he explains his publication and circumstances. His view of self-publishing, stated near the end, deserves note.  He no longer shows his own face as he used to, even though he is around thirty and looks quite fit physically, don’t know why.  He does not seem to like to have videos embedded, so I will just give his link.  I have embedded the Khan Academy’s account of Mussolini, which is similar.

Picture: Embed from Wikipedia, Mussolini and his Blackshirts