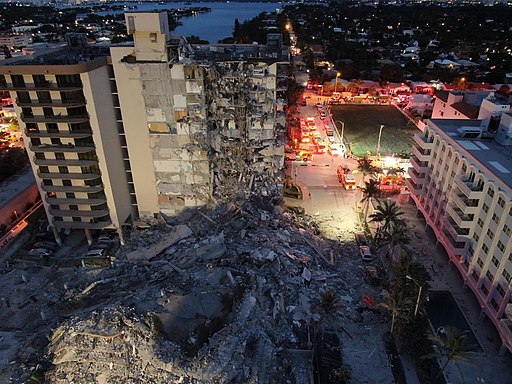 The article shows the layout of the units relative to the collapse and presents life stories in a 3D article.

The article leads to a technical article, heavily illustrated in 3-D diagrams, “Video, images and interviews, deepen questions about role, of pool deck in condo collapse.”  It does seem that the area around the pool going into the garage affected the stability of part of the whole building.  It is not easy to summarize.

I don’t know if this has happened to a major high-rise in the US.  It has happened overseas, as with a particularly horrible fire in Britain because of the building’s outer covering.

Suing the condo association amounts to suing all the owners.  One problem is that most condo boards are lay persons elected by owners;  they are not necessarily engineers.  Your HOA is your lowest level of local government.  Most would not have the financial reserves for such liability, and I don't know how well building Master policies cover losses.  They would have large deductibles per unit.

In northern Virginia, a Skyline Towers condo building under construction collapsed in March 1973 when shoring was apparently improperly removed.

There was a possible “near miss” with New York City’s Citicorp tower, built in 1977, Slate article.